IE10 and below are not supported.

Why are you proposing street safety improvements on 11th?
Why are crossing lights not being considered at 11th and Nicholson?
What does Street Rehabilitation mean?
Besides 11th and Nicholson, are there plans for pedestrian refuge islands at other intersections along 11th?
How will this impact emergency vehicle responses?
Will this be a physically protected bikeway?
Will this project include cleaning/maintenance plans and budgets to ensure that the bike lanes stay in tip-top shape?
How will this impact METRO bus route 30 that runs along 11th? Have bus stop locations been coordinated?
How will decreasing the number of lanes impact traffic flow?
I understand that this is not in your scope, but where can we get an update on the Shepard/Durham project?

Why are you proposing street safety improvements on 11th?

There are three main reasons for improving 11th Street.

1. As of 2019, 11th Street has a higher crash rate than the average 4-lane undivided roadway in Texas. 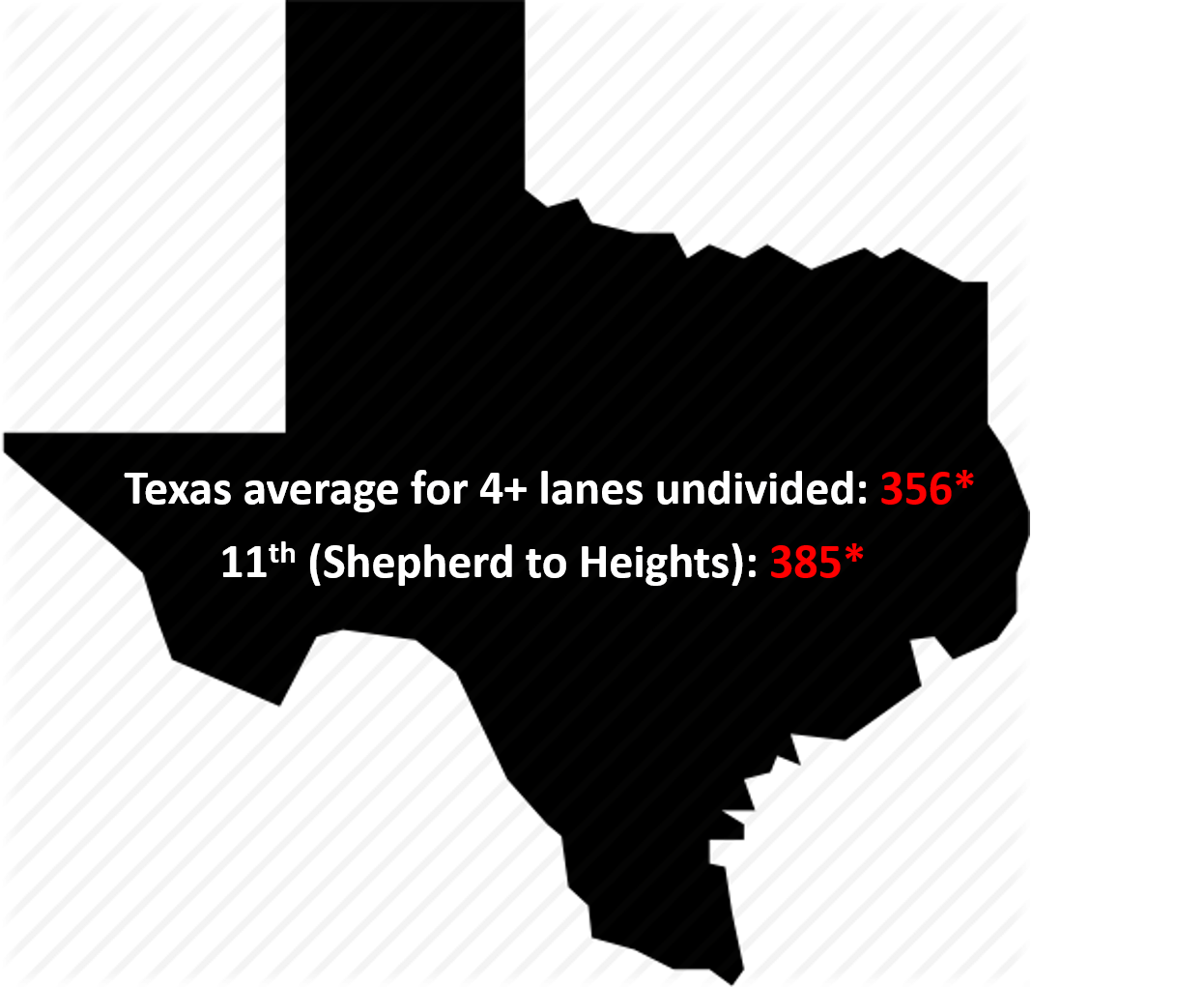 2. Typical speeds on 11th are 38.5mph. This is a deadly speed for pedestrians. If a driver hits a pedestrian at 40mph, the pedestrian has a 10% chance of surviving.

3. Community members have expressed traffic safety concerns about the difficulty crossing 11th as a pedestrian and bicyclist. People walking and biking in the area experience long wait times to cross 11th because the number of lanes, vehicle speeds, and failure to stop for pedestrians/bicyclists in the crosswalk make it difficult to cross. This has been noted at numerous intersections throughout the corridor, including 11th at the Nicholson Hike & Bike Trail.

Why are crossing lights not being considered at 11th and Nicholson?

Crossing lights (such as a pedestrian-activated light) at 11th and Nicholson are up for consideration, but this only treats one intersection and does not address safety concerns along the entire corridor. Additionally, in its current configuration, 11th and Nicholson does not meet certain engineering standards for a light. There are a few design treatments that we can make to address this intersection and the entire corridor. These treatments are part of the proposal and also make it easier to implement a light, should one be necessary in the future:

What does Street Rehabilitation mean?

11th Street from Michaux to Studewood and Yale to Dorothy will be rehabilitated to improve pavement quality. It is on the list to be improved in Fiscal Year 2025, as part of the Mayor's Street Rehabilitation Initiative, and has been moved up the list to align with the street safety improvements construction. This helps to save costs and minimizes the number of disruptions made in the community. Rehabilitaton is estimated to start September 1st, 2022 and will start with the eastern most portion of 11th, Michaux to Studewood (phase 1), then move to the portion between Yale to Dorothy. 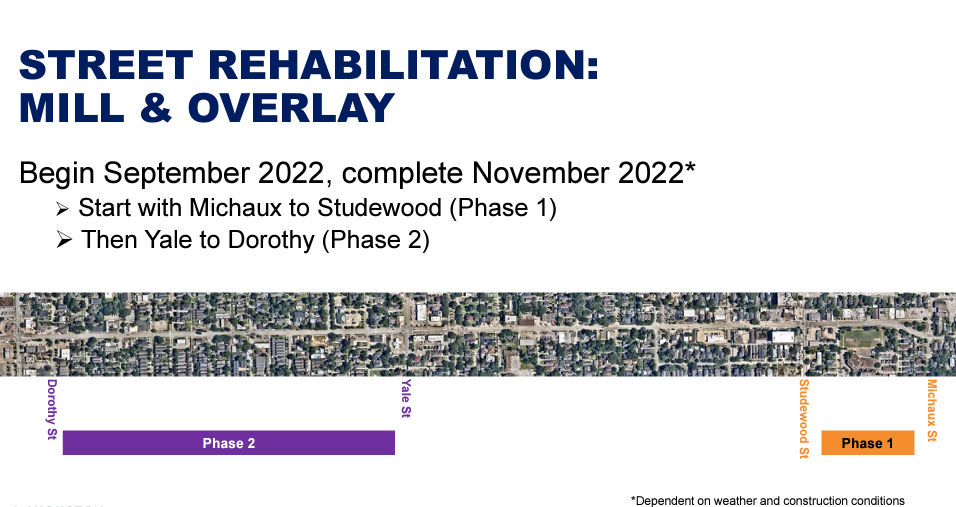 Street rehabilitation will cover mill & overlay of the existing pavement in the indicated segments but will also cover needed spot repairs to curbs, ramps, and sidewalks as they are identified from field inspections. The project manager and inspector for the street rehabilitaiton are listed in the "Who's Listening" section on the right side of this page.

More detailed information can be found in the PDF presentation by clicking here.

Besides 11th and Nicholson, are there plans for pedestrian refuge islands at other intersections along 11th?

How will this impact emergency vehicle responses?

Both Houston Fire and Houston Police are part of the City of Houston plan review process for street designs. They have reviewed and approved the 100% design plans for 11th Street.

Will this be a physically protected bikeway?

Most of the 11th Street Bikeway will be protected by a physical barrier, such as armadillos or concrete curb. The bikeway includes a designated lane for people biking (between 5-6ft), space between the lane and vehicle traffic (a 1.5-2ft buffer), and in the buffer will be a physical barrier. On Michaux Street, where traffic volumes are low and vehicle speeds are slower, we will designate shared space for people biking and driving.

Will this project include cleaning/maintenance plans and budgets to ensure that the bike lanes stay in tip-top shape?

How will this impact METRO bus route 30 that runs along 11th? Have bus stop locations been coordinated?

We will coordinate with METRO on proposed bikeways and ensure bus stops are accessible and in the right places. The 30 Clinton/Ella bus route runs every 30 minutes during peak hours and every 60 minutes during off-peak hours. With this frequency, bus pick-up/drop-off can be managed alongside a protected bikeway while maintaining safety for everyone. A shared bus/bike area will be designated so that buses may pull over to the curb and bus stop. 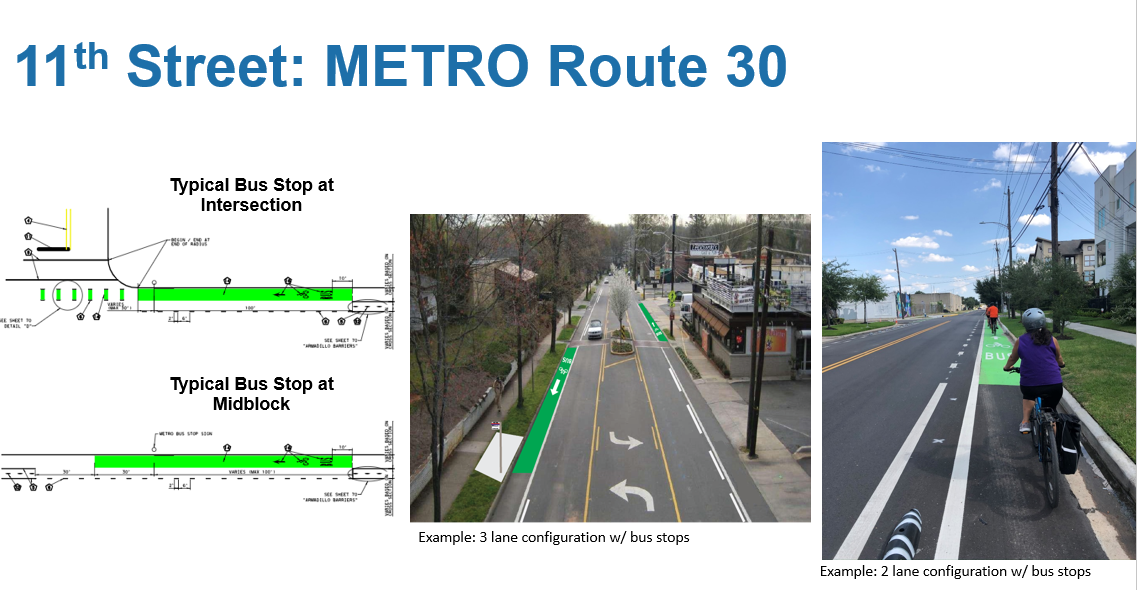 How will decreasing the number of lanes impact traffic flow?

Traffic volumes were assessed in 2019 and this portion of 11th street carries around 14,500 vehicles on an average day. The Federal Highway Administration (FHWA) recommends implementing a road diet on a roadway with current and future average daily traffic of 25,000 vehicles or less. Below is a graphic showing volumes on 11th, and other streets in the area, over the last decade: 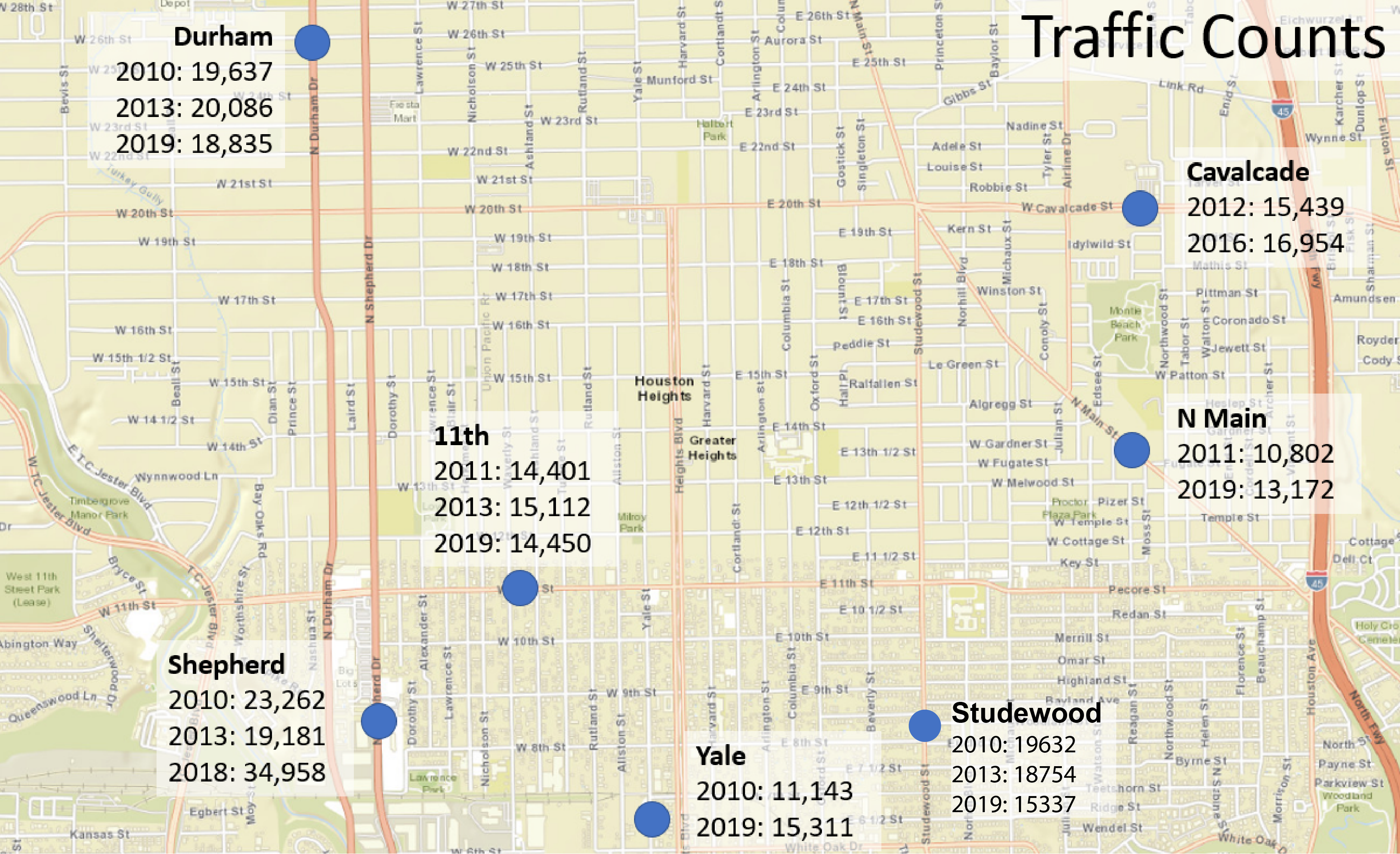 When looking at other cities who have converted 4-lane undivided roadways to 3 lanes with a center turn lane, we see that it can be successful at higher volumes. In the table below are locations throughout the U.S. where traffic was measured before the road diet and after. You might expect that traffic would decrease significantly because people driving would be cutting through other streets to avoid any traffic congestion. However, across the board we see those volumes remain relatively the same, meaning that three-lane roadway is allowing traffic to flow just as it was before. 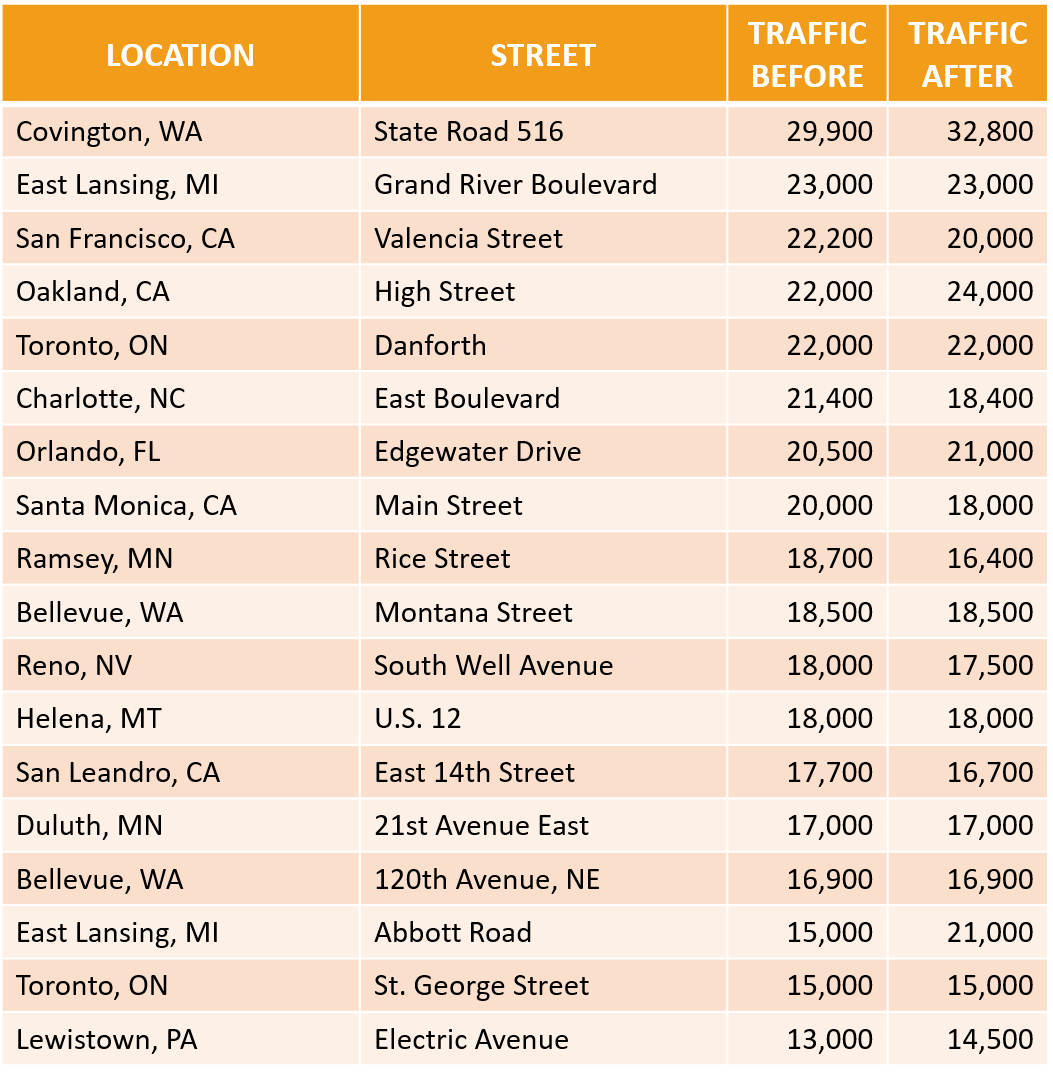 Traffic volumes measured before and after implementing a road diet on streets throughout North America. 24-hr Traffic Counts

We looked at a two-lane configuration, which is currently proposed between Shepherd and Yale. We modeled traffic at regular intervals, which is indicated by the darker green bars in the graph on the bottom right. Each lane has the capacity to carry 800-1000 vehicles/hour, which is indicated by "Lane Capacity" on the top and bottom of the bar graph. Traffic counts indicate the eastbound lane is at capacity for one hour during the day from 5-6pm. 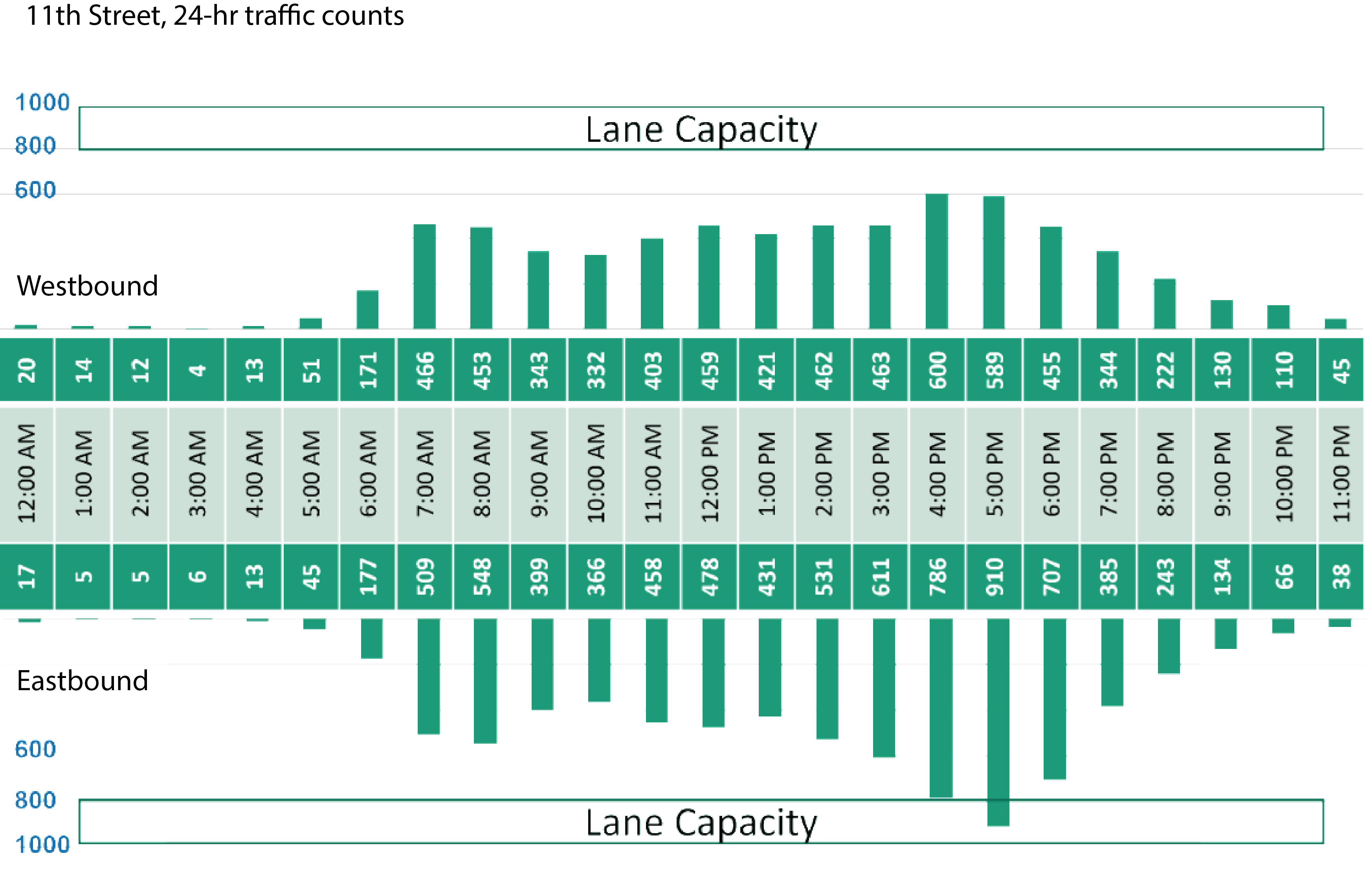 These data show that traffic is projected to flow well throughout all hours of the day. During the peak hour from 5-6pm, there will likely be some slowing of traffic. Most delays in any transportation system will be at major intersections and we have completed a separate traffic analysis to ensure that reasonable delays are maintained at signalized intersections along 11th.

Because we will not have major delays on 11th street, we expect it to be a route used by many to move through the Heights. So, people driving will be less likely to cut through side streets.

I understand that this is not in your scope, but where can we get an update on the Shepard/Durham project?

Memoral Heights Redevelopment Authority and TIRZ 5 are leading improvements to Shepherd/Durham. Project information can be found at https://memorialheightstirz5.com/projects/shepherd-and-durham-major-investment-project/